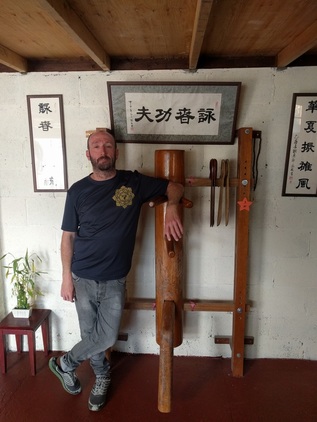 I started Wing Chun in 1997 and opened my own school in Feb 2000.  In April 2004 I emptied my cup and travelled to Canada to study under Master Eric Li (Li Yun Tung) and have been lucky enough to be accepted as his student, and sole instructor in Europe. My understanding of the system has been transformed under Sifu Li's guidance, which is thorough, humble, consistent and incredibly knowledgeable. Master is a term is which is too loosely used in the world of kung fu, but Sifu Li can truly claim the title - not merely due to his skill and understanding in the art - but because he has remained grounded, loyal to traditional methods of teaching and is happy to share rather than 'sell' the art. Anyone who has met Sifu Li (or just 'Eric' as he prefers to be called ) will testify to these sentiments, and students of SWCS are incredibly lucky, as am I, to have access to such a teacher.

My aim is to teach Wing Chun to like-minded individuals free from the dogma of commercialism in martial arts. I have a strong ethical approach and I am equally concerned with you developing as an individual, as I am a competent martial artist. You'll hear no politics at our school, no rubbishing other teachers or other martial arts. We love what we do, and if you like that too you'll be made very welcome !! If you want a very simple approach to an art which is all too often adulterated, you might like come and try a class for free!

For further info contact Stuart at sifu@swanseawingchun.org.uk or call 07703 575732

Dave Thomas came to our club just tagging along for a few lessons with his son. When his lad left,  Dave stayed, started training twice then three times a week and has put in a level of training in three years that some students wouldnt commit to in double that timeframe!!! Dave is patient, incredibly enthusiastic and passionate about the art and received his instructor qualification directly from Sifu Mackinnon and Master Li in 2010.  Dave has completed the full syllabus and passed his Si-Fu assessment in October 2012.

Dave teaches Wing Chun  in the Port - Talbot area. Dave is also a Master Woodturner, so for all enquiries on classes, private instruction or the best wooden dummies available For more info contact Dave on 07900 846397 or www.porttalbotwingchun.org.uk or email dave.thomas@dtwoodturning.co.uk.
Powered by